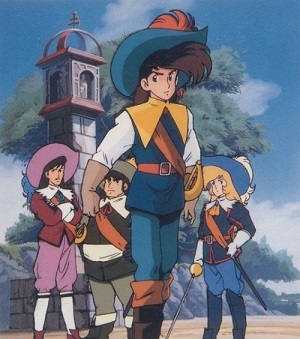 The Three Musketeers (アニメ三銃士 Anime Sanjūshi) is a 1987 Japanese animated television series based on the eponymous novel by Alexandre Dumas, directed by Kunihiko Yuyama (Pokémon) and aired on NHK.

A feature film sequel, Anime Sanjūshi: Aramis no Bōken, was released in 1989.

The show follows the main plot of the book, however, several changes have been made. Notably, Constance is Bonacieux's daughter, not wife, this is a kid show after all. The action occurs in the matter of months instead of years, exemplified with the Man in the Iron Mask storyline taking place much earlier than in Dumas' timeline.

Obviously, most of the tropes applicable to the first book can apply to this series.

Not to be confused with Dogtanian and the Three Muskehounds.