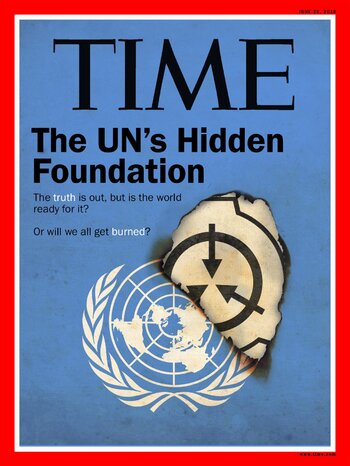 .
"We used to have 'laws' in this town. Like 'gravity'. You remember gravity, right?"
— A police officer after a run-in with Superman, Action Comics #1
Advertisement:

The paranormal exists; it's just very good at hiding. The Masquerade has existed for centuries now, and the Things That Go "Bump" in the Night are just fine with that, thank you. They're not going to trouble humanity, and hopefully, humanity won't trouble them.

Then... something happens. Something so big, something so visible, that plausible deniability just won't cut it anymore. Maybe some young vampire walked into the sunlight in full view of a camera crewnote Assuming, of course, that this vampire shows up on video. Maybe two wizards got in a duel on Main Street. Maybe everyone's just decided to "come out of the coffin", or maybe the spread of technology made it notoriously difficult to keep things under wraps in a world where every interesting sight inevitably ends up on YouTube. Either way, the masquerade has been broken, and it will stay broken.

Welcome to a brave new world.

The Unmasqued World is a world where the supernatural has, after years of hiding, revealed itself to the world, intentionally or otherwise. In many cases, this will lead to a lot of modern twists on the fantasy genre's usual formulas and/or the integration of the supernatural into society -- vampires on the police force, wizards in the hospital, werewolves in the park service. Expect much Fantastic Racism (and perhaps a group of Zombie Advocates opposing it), as not everyone's just going to accept that the traditional horror movie monsters have decided to move next door as roommates.

A common variant is a world like ours but where the supernatural exists and has always been known to the public. This will often involve Alternate History in which supernatural forces influenced historical events.

Compare First Contact, the science fiction equivalent of this; Cosmic Horror Reveal, where the existence of Eldritch Abomination is revealed and the story shifts to a Cosmic Horror Story; Mundane Fantastic and They Walk Among Us, for when there is no segregation between the mundane and mystical worlds (and, in some cases, never was); and The Magic Comes Back for when magic stopped working some time in the past but started working again by the time the story takes place. When someone is trying to do this on purpose, see To Unmasque the World. When someone is trying to prevent this, it's usually because The World Is Not Ready.

Spoiler warning: while this trope is a basic premise for most of the examples, it is the dramatic ending of others, in which case the series name alone is a spoiler.

Whole World Will Know of Us

In a single move, Magneto reveals the existence of mutants to the world using the X-Men's battle with the Sentinel.

Whole World Will Know of Us

In a single move, Magneto reveals the existence of mutants to the world using the X-Men's battle with the Sentinel.