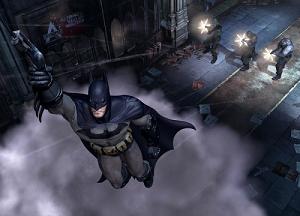 He must obviously be in that mass of smoke! Shoot him!
"Ninjutsu employs explosive powders — as weapons or distractions. Theatricality and deception are powerful agents. You must become more than just a man in the mind of your opponent."
— Henri Ducard, Batman Begins
Advertisement:

A fairly standard disappearing trick, favored by Ninja, stage magicians, and Batman. Drop a clever little smoke bomb that puffs up and dissipates quickly, slip away during the distraction. A smoke cover apparently qualifies as being "offscreen" enough for Offscreen Teleportation, allowing a user to escape even if he or she was standing in a clear area where his/her exit would be seen at least by the viewer if not an opponent.

Still played straight in most cases, though there are a few stock variations and subversions:

Compare Stealth Hi/Bye, Disappearing Box. Contrast with Super Smoke. See also Trick Bomb (of which this is a Sub-Trope), Ninja Log and Escape Battle Technique. A Handful for an Eye may serve the same purpose.