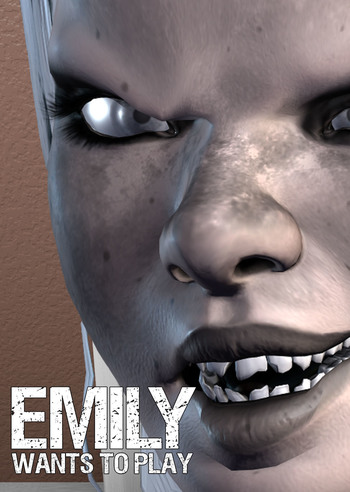 A face only a mother could love.
"Hello? Your pizza's here!"
Advertisement:

Emily Wants To Play is a Survival Horror game created by Shawn Hitchcock. It was released on Steam for PC and Mac on December 12, 2015. A mobile version was released on January 30, 2016, for iOS and Android. Playstation 4 and Xbox One versions followed on August 9th, 2016 and September 9th, 2016.

The game is played from the perspective of a pizza delivery man. He walks into a strange house on his final delivery of the night and is locked in by a ghostly girl named Emily. He then roams around the house looking for clues while trying to survive the night from Emily and her dolls. The story unfolds through notes apparently left by Emily and tape recordings from her mom. Throughout the night, the dolls and Emily appear to the player to play children's games. Playing these games incorrectly ends with the pizza man being attacked and the game resetting to the beginning of the hour. The pizza delivery guy must make it through each hour of the night without being attacked.

You can purchase the game on Steam

A sequel called Emily Wants to Play Too was first released on Steam on December 13th, 2017 here

Emily Wants To Play Too provides examples of: