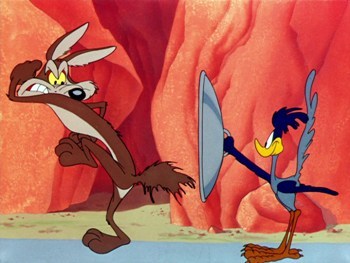 The first of many.

"Fast And Furry-ous" is a 1949 Looney Tunes cartoon directed by Chuck Jones, featuring the debut of Wile E. Coyote and the Road Runner (and by extension their stock tropes).

It is listed as one of The 100 Greatest Looney Tunes and also ended as a runner-up in The 50 Greatest Cartoons.