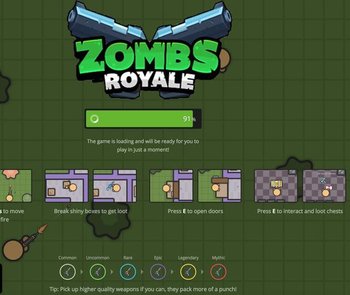 is a free-to-play Web Game, which combines top-down shooter with the "battle royale" subgenre, popularized by Player Unknowns Battlegrounds and Fortnite.

Like in those, a 100 players or so jump out of a plane with parachutes, and land over an island littered with crates full of guns and ammo. The goal is to kill each other until only one (or 2, or 4, depending on the game mode) is left standing, while tension is raised by a ring of poison gas occupying ever more territory on the island. Certain weapons, like rocket launchers, flamethrowers or even Miniguns are far more available, while the top-down perspective alters the calculus on many of the familiar ones.

See BattleRoyale.io, Foes.io, Thelast.io and Surviv.io for the other versions of this idea in the .io Game world.