Video Game / The Art of Theft 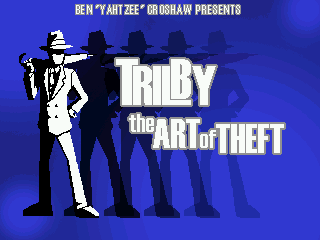 "As I said, I like stealth games. Kicking the door in and holding down 'fire' until all organic matter has fused with the wallpaper feels like it should be a last resort, while getting out unnoticed feels like the real show of skill."
— Yahtzee on Stealth Based Games in general
Advertisement:

A spinoff of the Chzo Mythos game series by Ben Croshaw. The game features Trilby in his former life as a master thief and your goal, of course, is to steal various things using a grappling hook and other gear.

Unlike the games in the main series, this is a Stealth-Based Game rather than an adventure game. The plot is also unconnected to the Chzo Mythos, apart from Trilby's presence.