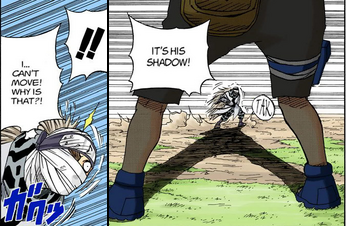 When it comes to fighting in some series, it's not enough to just simply land wounds on someone's body and restrain them using conventional means. No, sometimes you need to go one step farther than usual and show off how badass you are, and what better way than to use a non-physical part of someone's body to pin them like a fly on a wall — mainly, their shadow.
Advertisement:

Almost always supernatural in nature, a Shadow Pin generally means that you're dealing with a very dangerous person, and it seems to be a common foray of Ninja, probably due to their inherent relationship with shadow and darkness. In some cases it can also be used to form a Mirror Routine between the controller and the controlled, and the entire process is often very humiliating for the one being controlled.

An Exaggerated version of Pinned to the Wall. See also Shadow Walker.