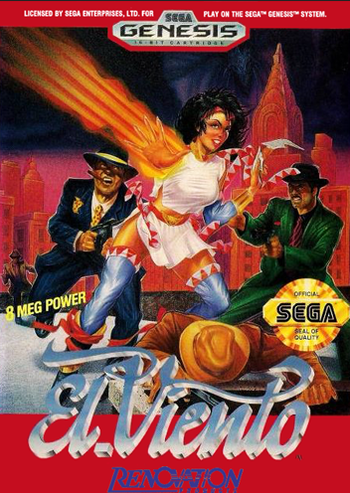 El Viento is a 1991 platform sidescroller made by Wolf Team for the Sega Genesis. While not a groundbreaking game by any means, El Viento is full of fun and fast-paced action.

The game is set in the USA, at the end of the Twenties, and features unexpected references to the Cthulhu Mythos: Annet Myer must stop the combined efforts of The Mafia and some guy named Henry, who are trying to perform dark rituals on top of the Empire State Building in order to summon the elder god Hastur. She is armed with a set of bladed boomerangs and a small selection of magic spells, which she has to charge. Among the many goons, creatures and environment hazards, Annet will also have to fight Restiana, a distant relative of hers and one of Henry's misguided followers.

The game retroactively became the second chapter of the Earnest Evans trilogy, even though it is not an Earnest Evans game (almost) at all, since the player controls young sorceress Annet and Evans just appears in some cutscenes.