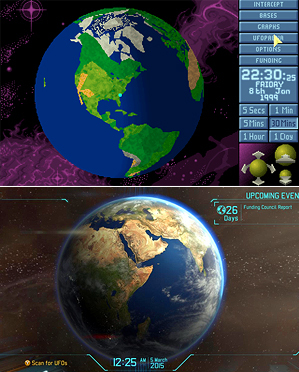 Vigilo Confido.note Loosely "I Am Watchful, I Am Necessary"
"You must not fight too often with one enemy, or you will teach him all your art of War."
— Napoleon Bonaparte (attr.)
Advertisement:

The brainchild of Julian Gollop and assorted MicroProse personnel, X-COM is a British series of games created in 1993. Players are put in charge of X-COM, a planetary defense agency, and tasked with maintaining X-COM's budget and catching flying saucers (either by storming their landing sites or shooting them down). What follows is a mix of Turn-Based Tactics and resource management. Although the games have a fair amount of randomness, the better player will tend to win.

The first title, UFO: Enemy Unknown (marketed as X-COM: UFO Defense in North America) was a watershed title for the genre. Despite its modest origins, the X-COM legacy was not a solo act: While Gollop's team set to work on a sequel called X-COM: Apocalypse, an in-house crew at MicroProse beat him to the punch in 1995 with a Mission-Pack Sequel: X-COM: Terror from the Deep, set 40 years after the First Alien War. Apocalypse took place another 40 years later in an isolated city, and included the option to play in real-time. The last days of MicroProse (and its acquisition by Hasbro Interactive) saw three Genre Shifted offerings: X-COM: Interceptor (1998), an interquel which kept the base management elements while swapping out the strategy missions for a space-bound flight sim. Next was X-COM: First Alien Invasion, an e-mail game. Then came X-COM: Enforcer (2001), a Gaiden Game which ditched the strategy outright in favor of an FPS. As of March 2016, all three games of the classic series (along with Enforcer and Interceptor) are available at GOG.com

note Link goes to the first game. as well as Steam.

Afterward, the future of X-COM became uncertain due to the rights passing between various companies. In 2010, 2K Marin announced that they were rebooting the storyline: an FPS set exclusively in the USA in The '50s. The fandom's response to the reboot was negative enough that Firaxis Games (a subsidiary of 2K and developers of the Civilization series) were tasked with creating a title closer in-line with the original X-COM. The result was XCOM: Enemy Unknown. The FPS reboot was retooled into a third-person tactical shooter: The Bureau: XCOM Declassified, intended as a prequel to Enemy Unknown. (The game's three separate iterations are documented here

In 2016, Firaxis released a sequel to Enemy Unknown which re-imagines X-COM as an underground resistance cell fighting against alien occupiers. The 2020 spin-off XCOM: Chimera Squad is a combination of Apocalypse (on-the-street storyline) and the 3D games (a smaller specialized squad).

Entries in the franchise:

The X-COM series or multiple entries in it, provide examples of: