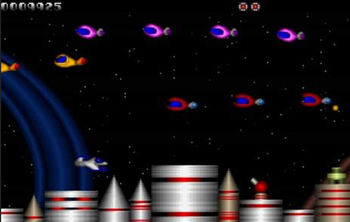 Xatax is a Shoot 'em Up produced by Pixel Painters for the DOS PCs and released as a three-episode shareware title in 1994.
Advertisement:

It is the 25th century and after centuries of peace a disarmed humanity is under attack by an alien force known as the "Xatax", which destroys planets by consuming all life on them and leaving only barren wasteland. The Xatax grows stronger with each world it destroys by assimilating the living creatures it consumes into itself.

An ancient starfighter has been taken from the Interguild Museum located on Terra and restored to combat condition. It must now destroy the Xatax.