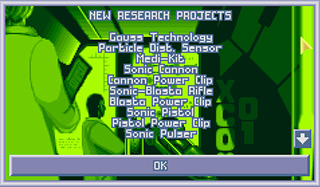 Looks like our soldiers brought us a full bag of spoils. Interrogate every alien that moves, autopsy any that doesn't, find their Achilles' Heel and learn to use their weapons against them. For Science!
"I'm going to the crime scene to see what I can find out. You guys research the Polgara demon."
— Buffy, Buffy the Vampire Slayer, "Goodbye Iowa" (and most other episodes)
Advertisement:

A new monster has arrived in town and it's already beaten off our heroes once. Is it time to get dangerous?

No. It's time to hit the books.

Our characters head to the Magical Library to consult the Great Big Book of Everything and the Tomes of Eldritch Lore. They search the Omniscient Database and scan samples with the Everything Sensor, possibly with the help of a Hard-Work Montage. Only when all avenues have been exhausted will they summarise their findings and formulate a new plan (which the audience may or may not be privy to).

Doing Research is the favourite pastime of Mr. Exposition, The Smart Guy, the Badass Bookworm and The Team Normal. It is most common on Monster of the Week shows, although Mystery of the Week has its fair share.

Not to be confused with Shown Their Work, which is about writers doing research.