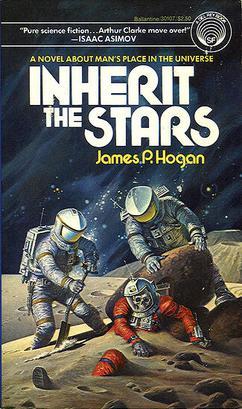 The Man On The Moon Was Dead
— Back cover blurb for Inherit the Stars
Advertisement:

The Giants Series is a 5-book series by James P. Hogan. Scientists at a lunar base find a dead body hidden in a cave, only to discover that the body is 50,000 years old. The first book covers the research into where the body came from, and how it got there. Later books cover interactions with an alien species referred to as the Ganymeans (as they were first discovered on a ship that had crashed into Ganymede) and a hidden conspiracy that has controlled much of human history.

The first four books have been collected into two omnibus volumes called The Two Moons and The Two Worlds. A manga adaptation of the first book was published as Hoshi o Tsugu Mono.

Because so much of the series revolves around major revelations from the first book, marking spoilers below leaves the examples looking like Swiss cheese. For that reason, spoilers are unmarked.