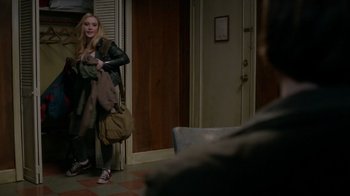 You checked in under the name Claire Novak. A little pro tip? Use an alias.
Claire: I wanna find my mom and tell her she ruined my life.
Castiel: Your mom didn’t...
Claire: She left me, and so did my dad. But Jimmy’s gone, right? Has it easy up in heaven. So Mom’s the only one left I can tell off.

Claire is searching for her mother in Tulsa, Oklahoma

when she meets trouble and must accept help from the Winchesters and Castiel.

Claire Novak is on the search for her mother, trying to gather information on her last known whereabouts, when her last lead knocks her out and she winds up in the hospital. Cas and Sam worry about Dean’s mental state and the effects of the Mark of Cain. Claire finds her mother, imprisoned by an angel who has been using her as a power source. Claire gets advice from Sam on how to hunt, while Dean explains to her that Cas and her father are heroes for helping to save the world.

For this episode: 3 humans and 1 grigori angel.