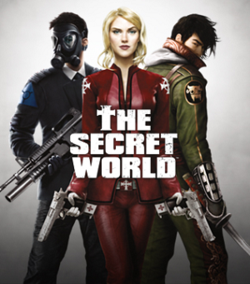 An MMORPG from Funcom, makers of The Longest Journey, Anarchy Online, Age of Conan and several other games, released on July 3rd, 2012. The premise of The Secret World is that all conspiracies are true, and major clandestine organizations compete to take over the world, whilst keeping swarms of mythical creatures under wraps in the process. Players join up with one of three ancient conspiracies: the Templar, The Illuminati, or the Dragon, to fight in a secret war waged in the shadows of our world.

An interesting draw is the lack of classes and levels — rather than selecting a class such as "mage" or "warrior" and only learn certain skills as you level up, players will be able to choose skills to do whatever they want — they are free to select both spells and melee, or stealth and healing magic or what have you. (Given enough time and effort, a player can learn to play any role with the same character.)

The Templars, based in London, are the most open of the three societies, as well as the most devoted to fighting evil in all forms. Pitted against them are the Illuminati, who are focused on personal gain and individualism. The third society, the Dragon, is the most enigmatic of the three — decentralized and secretive, the only thing sure about them is their dedication to their mathematical model that is said to represent the universe.

According to the developers, the game takes a lot of inspirations from works set in The Roaring '20s, from H. P. Lovecraft's books to the Indiana Jones franchise. It was even originally intended to be set in 1920s, but concerns over the setting's accessibility have led to a Present Day setting being chosen. The old setting was instead picked up again by the devs' later project, Draugen.

The Secret World was officially deprecated on March 29, 2017 and was replaced by Secret World Legends, a Free-to-Play reboot, on June 26 2017. SWL features a new combat system, more streamlined skill trees, and a more traditional leveling system. Old TSW accounts will still be able to play on a legacy server which will receive no further updates or support.

On October 27, 2015, The Park, a Spin-Off single player game, was released. Taking place in The Savage Coast's Atlantic Island Amusement Park, it follows the story of Lorraine, a young mother looking for her son Callum in the park.

On October 25, 2016, a second spin-off game, Hide And Shriek, was also released. It is a one-on-one multiplayer game, where players play the part of students of Innsmouth Academy and its rival Little Springs High School who attempt to scare each other in a Halloween Prank War, it is Lighter and Softer than either this game or The Park.

On Halloween 2019, another spin-off game, Moons Of Madness was released. It is a first-person, story-driven cosmic horror game that takes place on Mars, and deals with the Orochi Group.

Example of:
Religion of Evil