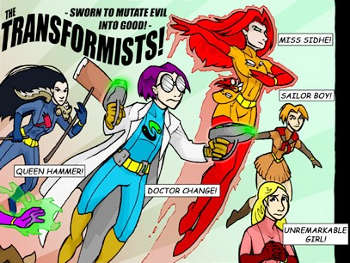 Remarkably normal.
"All you guys can do this awesome bending stuff, like putting out forest fires, and flying around, and... making other stuff fly around. I can't fly around, okay? ... I'm just the guy in the group who's regular."
— Sokka, Avatar: The Last Airbender
Advertisement:

In a nutshell, any team of superpowered people will often have members without powers.

So when the majority of the members are a Flying Brick, have mystical skills, wear Powered Armor, wear a Ring of Power, have a Charles Atlas Superpower, or even heart, The Team Normal has nothing. Okay, they can be really smart and have gadgets, but nothing that could confuse them for superpowered people (at least not unless that's what they want you to think).

These Sister Tropes are the most common ways this character is part of a team (just not the only ways):

Again, in order to count for this trope, a character has to be part of a team, and the majority of the team has to have some kind of powers.

Compare Team Pet, Team Mom, Team Dad, Muggle, What Kind of Lame Power Is Heart, Anyway? (when the character has powers on the team, just the weakest), Story-Breaker Team-Up (all members of a team-up have superpowers, but one is so strong, the rest might as well be normal) and The One with a Personal Life. Inverse trope to Token Super.