Franchise / Ghost in the Shell 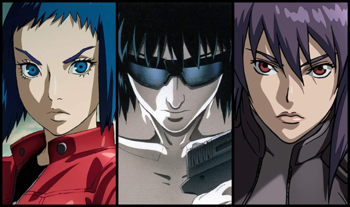 Ghost in the Shell is a highly influential Cyberpunk franchise about a cyborg woman that leads an elite Japanese police force. It began with a manga that first started publication in April 1989 and finished publication in November 1990. Since then, the series has spawned multiple adaptations, including movies — both animated and live-action — multiple animated TV series, video games, tie-in novels, and spin-off manga and comics.

In addition to the original manga, there are three subseries that all use the title "Ghost in the Shell", all unrelated from each other outside of being based on the same source material. Each iteration of the series features (mostly) the same cast of characters, the same setting, and explores the same themes of identity, memory, philosophy, and political intrigue.

Besides the above series, there is also a handful of one-off media:

This page is for the franchise in general. Please place examples for specific adaptations on their respective pages.

The Ghost in the Shell franchise provides examples of: