Film / Gamera: Guardian of the Universe 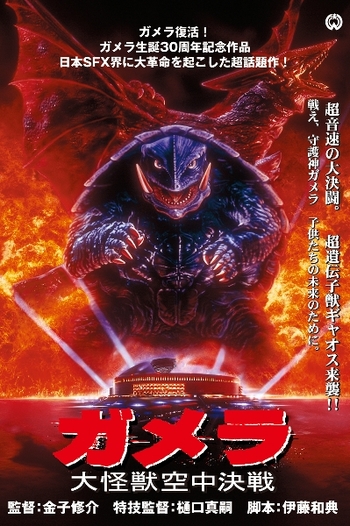 "The last hope: Gamera; We bestow it to the cradle of time. May it awaken alongside the shadow of evil: Gyaos."
~ The runes of the Atlantian tablet.
Gamera: Daikaiju Kuchuu Kessen!
The film's Japanese name, which translates to "Gamera: Giant Monster Midair Battle!"

Gamera: Guardian of the Universe is a 1995 film and the first installment of the Gamera Heisei trilogy, directed by Shusuke Kaneko and written by Kazunori Ito. It marked Gamera's return, and the point at which he, and the franchise, became a total badass.

Ten thousand years ago, an ancient civilization, which would prove to be the inspiration of the legends of Atlantis and Mu, created a genetically engineered lifeform called "Gyaos." These creatures were created most likely for the purpose of cleaning up the rampant pollution and trash that the ancients had made. However, the Gyaos soon began to reproduce beyond control, and they soon began eating the people that they were supposed to benefit. As coventional measures began to fail, the ancients created another lifeform to combat the Gyaos. These lifeforms were giant turtle-like creatures called Gameras. Unfortunately, by the time the Gameras were put to good use, it was too late. The civilization was in ruins, and so the ancients put the last remaining Gamera into hibernation, bequeathing it to the next civilization, should the threat of the Gyaos ever return.

Ten thousand years later, in 1995, a strange atoll makes an appearance in the Pacific Ocean, where a tanker transporting plutonium almost runs aground because of it. As an investigation is launched to find and study this mysterious atoll, which measures over 60 meters in length, another, darker mystery unfolds on Himegami Island, off the coast of Japan. The entire population of the island, including scientists sent there for research purposes, have disappeared overnight, with only a terrified radio call, ominously cut short by something in the background, letting civilzation know about this event. When an investigation is launched for this, zoologist Mayumi Nagamine (played by Shinobu Nakayama) and Police Inspector Tsutomu Osako (played by Yukijiro Hotaru) discover the remains of the previous scientific expedition and large numbers of what appear to be giant bird droppings. Further into the investigation, the culprits are discovered to be red-skinned, reptilian bird-creatures.

As attempts are made to study and capture these flying organisms, the scientific research team for the atoll in the ocean have discovered a stone tablet with runes on it. The research team is led by Naoya Kusanagi (played by Akira Onodera). Before these runes can be properly translated, a strange warmth is felt when Yoshinari Yonemori (a member of the crew of the tanker ship's escort vessel, played by Tsuyoshi Ihara) feels the tablet. In less than seconds afterwards, the tablet falls to pieces, and the atoll begins to fall apart, with rocks, and the research team, sliding off into the water. Yonemori sees the head of a giant creature as he falls into the ocean.

Meanwhile, the bird-creatures have finally been lured into a trap at the Fukuoka Dome, where its retractable dome roof makes it an ideal location for this operation. There, the creatures will be fed tons of raw beef while they are shot with carefully measured amounts of tranquilizer. The tranquilizers are fired, but the roof has not closed completely, and one of the creatures escapes. After almost reaching the ocean, a giant monster, resembling a turtle, rises out of the water and swats the bird-thing down, killing it. The monster then makes its way towards the stadium as it causes tons of damage to the city. When the monster finally reaches the stadium, the birds, using sonic beams to slice the bars, have escaped their cages and fly away, dodging the giant monster and escaping into the night. The giant turtle flies away by retracting its limbs and shooting jets out of the sockets.

At the Kusanagi residence, Yonemori gives Kusanagi's daughter, Asagi (played by Ayako Fujitani, the real life daughter of Steven Segall), a comma-shaped stone bead that he found on the atoll. Unknowingly, this bead allows Asagi to form a connection with the giant turtle. As the runes from the tablet are translated, it becomes apparent that the giant turtle is named Gamera, and that means that the birds are called Gyaos. As the surviving Gyaos have begun feeding, they are also growing, and now the JSDF is trying to capture them, while attempting to kill Gamera. Gamera soon manages to kill one of the Gyaos in the mountains. While pursuing the last Gyaos, Gamera is shot down by the military. The JSDF, believing Gamera to be the more dangerous of the two monsters, wage a misguided campaign against the colossal terrapin. After making another trip to Himegami island, Osako and Nagamine make a gruesome discovery: a nest of Gyaos eggs and newborns, all dead from killing each other. After collecting DNA from the remains of the eggs and baby Gyaos, tests are run and it is discovered that the Gyaos have only one pair of chromosomes. Nagamine and her colleagues soon reach two horrifying conclusions: the Gyaos are genetically engineered lifeforms, and they can reproduce asexually.

Nagamine and Yonemori realize that the Gyaos were responsible for the downfall of the civilization that created them, and that they have been awakened because the pollution of the environment has almost reached the levels of those thousands of years ago. Meanwhile, Asagi's connection to Gamera becomes increasingly important, as the JSDF have launched an attack on Gamera at Mt. Fuji, and when Gyaos appears, Gamera is only able to survive because Asagi's will for him to escape is transferred through the connection with the bead. Gamera soon disappears into the ocean, and falls into a recuperative sleep, as does Asagi, who sustained injuries that mirror those of Gamera when he was attacked.

The JSDF is finally convinced of Gyaos's threatening nature when the beast attacks Tokyo, killing dozens of people. The next day, the JSDF launchs an attack against Gyaos, but the monster outwits its opponents, and soon the top half of Tokyo Tower is destroyed. Gyaos makes its nest on the surviving half of Tokyo Tower. With the military proving to be ineffective, Tokyo is evacuated, and the Dow drops considerably due to the monster's claim on the terrified city. A day or so later, Asagi and her father enter Tokyo, informing Nagamine, Yonemori, and the rest of the JSDF that Gamera has healed. A huge earthquake rocks the city, stopping near Tokyo Tower. Gamera soon bursts through the ground, beginning his final battle with Gyaos, with Asagi, Kusanagi, Yonemori, and Nagamine following them. As the two monsters duel, the city is turned into a battlefield. Eventually, Gamera leads Gyaos up into the atmosphere of the planet, and he manages to catch Gyaos by the leg. As the two monsters fall through the air, Gyaos desperately tries to escape from Gamera's clutches, going so far as to cut its own leg off with its sonic beam. Gyaos manages to escape with this, just as Gamera plummets into a refinery. Gyaos fires its sonic beam at the refinery, causing huge explosions, and seemingly killing Gamera.

As Gyaos lands on the ground, Asagi holds her father's hand, and through her willpower (possibly) the flames around the refinery begin to come alive, swirling together to reform Gamera. Gyaos, clearly shocked by this, prepares to unleash one final attack. Gamera, with help from Asagi, unleashes his own final attack. Gyaos is killed by Gamera's fireball, and soon falls back into the rinfery. As the plumes of smoke and flames rise into the air, one last sonic beam cuts through the sky until it finally fades, signaling that the shadow of evil has been defeated...for now. His mission completed, Gamera returns to the sea, with Asagi claiming that will Gamera come again if humanity is ever in need of him. The film ends with a kickass song by Bakufu Slump playing over the end credits.

Released on March 11, 1995, Gamera: Guardian of the Universe was a huge success, with the film even managing a US theatrical release in 1997 courtesy of ADV Films (turning the film into a sort of Neon Genesis Evangelion crossover, from a certain point of view), which in turn prompted Dark Horse Comics to make a four-issue sequel miniseries. Even Roger Ebert was impressed with the film.

Because Gamera had become a joke, he had almost no legacy that needed to be preserved. Because of this, Kaneko was able to revive a franchise in a manner that had not been done since 1984, and would not be done again until 2005. The special effects were directed by Shinji Higuchi, who had worked on The Return of Godzilla under Teruyoshi Nakano, and the music was composed by Kow Otani (or Koh Otani). The film proved to be so popular that it would be followed by an equally successful sequel the next year. However, the most important thing that this film did was prove that Gamera was now capable of rivaling Godzilla, a feat almost undreamed of until now.

Its story is followed by Gamera 2: Advent of Legion.

Not to be confused with Gamora, a guardian of the galaxy which is weirdly close, but completely unrelated.