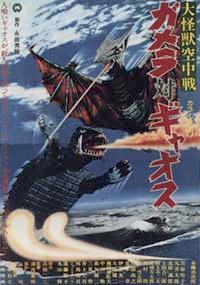 "I named it Gyaos, because of the sound he makes!"
—Eiichi
Advertisement:

Produced in 1967, Gamera vs. Gyaos is one of the more popular entries in the Showa Gamera series, and it would introduce Gamera's most popular foe, Gyaos. The film was also the last entry to feature a music score by Tadashi Yamauchi, who also scored the first film as well. This film featured the return of Gamera's love of children, and it was the movie where Gamera became a heroic monster instead of a villain, like he was in the previous two entries. Like the first movie, and all succeeding it except Gamera vs. Barugon, Gamera vs. Gyaos was directed by Noriaki Yuasa, who also helmed the special effects.

Often considered the last really good film of the Showa Gamera series (though Gamera vs. Jiger is another contender), Gamera vs. Gyaos, like Invasion of Astro-Monster, was also the beginning of the end for the franchise, as Gamera's love of children would only cause future films, with the possible exception of aforementioned Gamera vs. Jiger, to become increasingly ridiculous and child-oriented. Oddly enough, the films would still be very gory, with monsters bleeding and losing limbs like a carnival of delicious horrors.