Comic Book / Gamera: The Guardian of the Universe 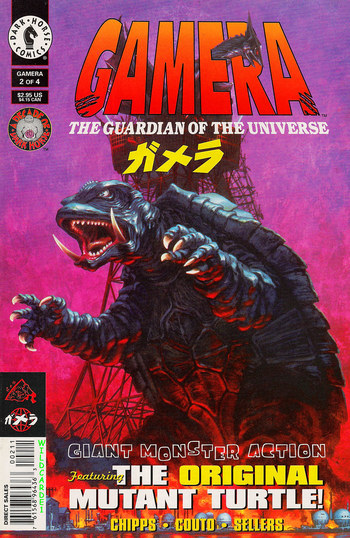 "Created by an alien race to protect themselves from the Gyaos - the genetically engineered monsters they'd unwittingly released into the world - Gamera's creation came too late to save his designers' crumbling civilization. Despite this, Gamera fulfilled its programming and destroyed all of the living Gyaos. Asleep for thousands of years, Gamera woke when the Gyaos once again appeared on earth. Telepathically linked to a young girl through the power of an ancient amulet, Gamera has become the protector of mankind and the Guardian of the Universe."
Advertisement:

In 1996, following the successful release of Gamera: Guardian of the Universe, Dark Horse Comics - having already had experience with Kaiju courtesy of a similar Godzilla miniseries - decided they wanted to cash in on the hype surrounding Gamera's return to the big screen and obtained the rights from Daiei to make a four-issue miniseries surrounding the giant turtle.

The miniseries Gamera: The Guardian of the Universe takes place after the similarly-named movie and presumably before Gamera 2: Advent of Legion, and surrounds rough-and-tumble pilot Lutz encountering Mayumi Nagamine and Asagi Kusanagi as they visit Mexico on the trail of exotic birds, but soon enough, they stumble upon the presence of Gyaos - courtesy of a Mad Scientist - and the matter quickly becomes a job for the Guardian of the Universe, assisted by Lutz, Mayumi, and Asagi.

In addition to Gamera and Gyaos, this miniseries is notable for including two monsters from Gamera's Showa Era movies; Zigra and Viras.