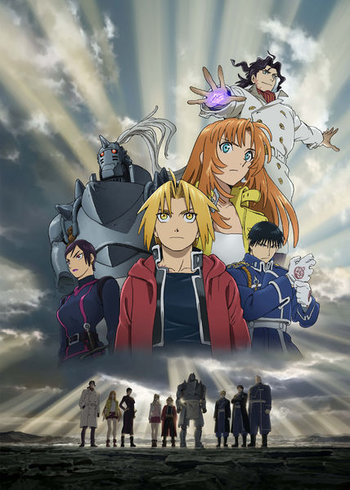 The story sees Ed and Al head to Table City, a military-occupied city surround by a circular crevasse called "The Valley", to capture a criminal who escaped prison. En route to the city, the train is attacked simultaneously by werewolves and people in flying suits, all of whom seem to be after a young girl. During the scuffle, Al is knocked into The Valley with the girl.

One thing leads to another and the brothers find themselves caught in-between a civil war between the people of Table City and resistance fighters within the Valley looking to reclaim it. As is always the case, things are not as they appear.

Released in Japan in 2011, and gained an English dub from Funimation in September 2012. It aired on Toonami as part of their December 2014 Month of Movies.

The movie has the following tropes