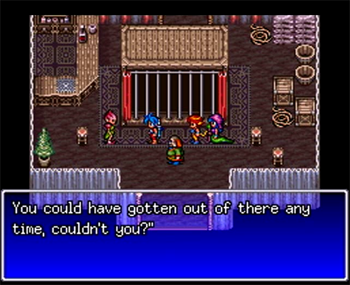 ...no, not at any time; only when it was funny.
"I could have escaped any time. But I thought I'd stick around to keep an eye on you clowns."
— Batman, Justice League, "Injustice For All"
Advertisement:

Congratulations! You just captured the notoriously dangerous and evasive adversary. You've got them Bound and Gagged, and using Enhanced Interrogation Techniques, they still won't budge. Finally, they ask a question: "I'm bored. Can I go now?" and then they proceed to break free like they could have done it at any time.

Highly related to Breaking the Bonds, except that the prisoner decides to hang around for a while before breaking free. May sometimes be a form of I Surrender, Suckers, when the person deliberately allows themselves to be detained. Sometimes, the captive might not bother to escape, and just hang around until the end of their prison sentence (but still heavily imply that they could have walked out at any time). Occasionally, the prisoner stays in prison because there's no real reason to escape since they're working their schemes just fine from inside. This is a useful skill for the Trojan Prisoner. It also often shows up as part of a villain's escape from a prison that's apparently made out of cardboard.

This Trope can be a dangerous foil for The Jailer, and often is. Also a common case for powerful heroes who have been Wrongly Accused. They often stay around to show their respect for justice, and because breaking out would convince people of their guilt, as well as getting them into unwanted fights. It can also be a form of protective custody from their point of view. Compare Captured on Purpose, where a character lets themselves be captured as part of a plan and can't necessarily escape easily.

Ben could have escaped from Rex and company at any time, given that they have no counter for Big Chill's intangibility. He only stuck around for answers, and left when he felt like talking was getting him nowhere.

Ben could have escaped from Rex and company at any time, given that they have no counter for Big Chill's intangibility. He only stuck around for answers, and left when he felt like talking was getting him nowhere.