Western Animation / She-Ra and the Princesses of Power 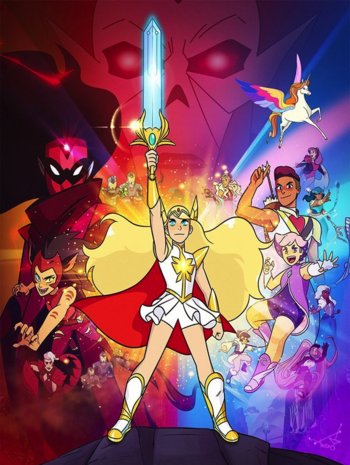 "For the honor of Grayskull!"
"I know the legend of the warrior the First Ones called She-Ra. They said she would return to us in the hour of our greatest need to bring balance to Etheria. I never thought she was anything more than a myth. And yet you're here now. And in the uniform of a Horde soldier, no less. You would pledge to stand with us against the ones you once served?[...] Then rise. The Rebellion accepts your allegiance, She-Ra, Princess of Power."
— Queen Angella, "Razz"
Advertisement:

She-Ra and the Princesses of Power is a Continuity Reboot of the series She-Ra: Princess of Power released on Netflix and produced by DreamWorks Animation. It is the first installment to be made for its parent franchise in over fifteen years, following the short-lived He-Man and the Masters of the Universe (2002). The show is helmed by ND Stevenson, the creator of NIMONA and co-writer of Lumberjanes.

The series centers on the orphan Adora (Aimee Carrero), who was raised as a soldier in Lord Hordak's army known as the Horde only to discover one day that, not only is the group she dedicated her life to actually evil, but that she's the destined wielder of a magic sword from a precursor race that can transform her into She-Ra, a legendary warrior princess. Now a member of the Rebellion, Adora must help new friends Glimmer and Bow unite a group of magical princesses and wage battle against the evil Horde for the fate of the planet. Meanwhile within the Horde itself, Adora's former best friend Catra (AJ Michalka), feeling betrayed by Adora's sudden desertion, finds herself steadily climbing the ranks of command to become our heroine's biggest threat.

The show had a planned out 52-episode run, spread across several seasons. The first season premiered on November 13, 2018. The second season released on April 26, 2019; while the third season was released August 2nd, 2019; the fourth season released November 5th, 2019; and the fifth and final was released May 15th, 2020. note While stated as "five" seasons, the second and third was a split season: The second being seven episodes, the third being six, altogether being 13 eps, the full number for a season in the series. Technically the show is four seasons.

You can watch the first teaser here

and the first trailer here.

The second trailer can be seen here

Season 1 and 2 spoilers will be unmarked!

She-Ra and the Tropes of Power!

When Catra meets Melog, it forms a bond with her, after which it begins reflecting Catra's emotional state... and betraying her feelings for Adora.

I Never Hated You

When Catra meets Melog, it forms a bond with her, after which it begins reflecting Catra's emotional state... and betraying her feelings for Adora.

I Never Hated You