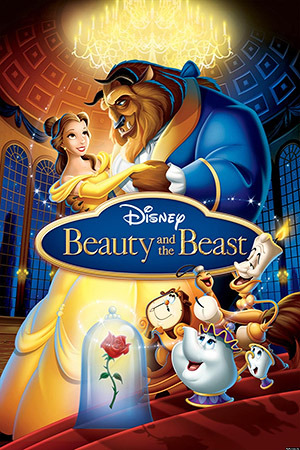 The most beautiful love story ever told.
"Tale as old as time
True as it can be
Barely even friends
Then somebody bends
Unexpectedly
Just a little change
Small, to say the least
Both a little scared
Neither one prepared
Beauty and the Beast"
— "Beauty and the Beast", Mrs. Potts (Angela Lansbury)
Advertisement:

Entry #30 in the Disney Animated Canon, from 1991. The film is directed by Gary Trousdale and Kirk Wise, with the screenplay by Linda Woolverton.

This retelling of the old fairy tale Beauty and the Beast has Homages to Jean Cocteau's 1946 film, but in its tone diverges from both versions and becomes its own story. Belle (Paige O'Hara) is a bookish lass in a rural French village who lives with her genial dad Maurice (Rex Everhart), who tinkers with various inventions. She would be a total outcast if not for her loveliness, and the proud hunter Gaston (Richard White) wants her simply for her beauty as a trophy wife — but she has no interest in an oafish Jerk Jock.

When Maurice doesn't return from a trip, Belle searches for and finds him in the hidden palace of a creature who imprisoned him when he sought shelter there. She offers herself in his place and the monster accepts. "The Beast" (Robby Benson) is actually a cursed human Prince who hopes her love will break the enchantment on him and his many servants, who were transformed into living furniture. With time running out, the Prince must tame his temper and Belle must learn to see the goodness beneath his exterior...

The film proved to be a great financial and critical success and is considered one of the greatest films of the Disney Renaissance. It became notable as the first animated film to be nominated for "Best Picture" at the Academy Awards.note It remains the only 2D animated film to get a nomination and it is notable that in 1992 the category was limited to five films. It is the only film in the Disney Animated Canon to be nominated. It was adapted into a stage musical in 1994

. The feature also spawned a live-action educational TV series called Sing Me a Story with Belle, two Direct to Video midquels by decade's end and is featured in the Kingdom Hearts series. In September 2020, the first ride based on the film opened at the Tokyo Disney Resort as part of its Fantasyland expansion.

A live-action remake starring Emma Watson and Dan Stevens was released on March 17, 2017. Beauty and the Beast: A 30th Celebration, a retelling of the film that mixes live-action theater and animation and starring H.E.R. and Josh Groban, aired on ABC on December 15, 2022 before a Disney+ release the next day.

I Let Her Go

I Let Her Go