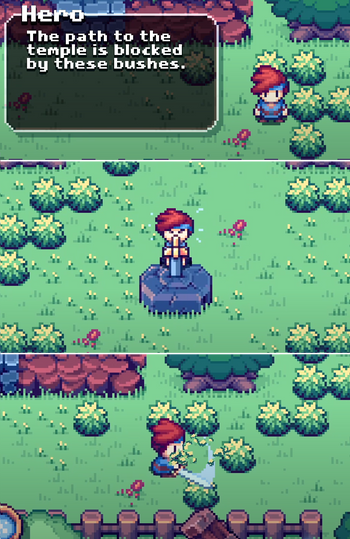 The Sword of Plot Advancement is the offensive or defensive item that the central plot of the game revolves around, and whose collection by the player signifies that they are now capable of advancing to the end of the game. It thus marks the end of the Second Act.

Most of the time, since said weapon acts as an Amplifier Artifact, it is the only Achilles' Heel of the immortal or Nigh-Invulnerable Big Bad. It may also be an example of a Legendary Weapon.

It isn't strictly a MacGuffin (which is meaningless in and of itself), because after it is attained and the dramatic tension surrounding it dissipates, it is still useful within the game's combat mechanics.

It contrasts with the Infinity +1 Sword, which is optional to the plot and is collected long after the protagonist ceases to require it. It is, however, somewhat of a headscratcher when said Infinity + 1 Sword (and even the Infinity -1 Sword) is stronger; see Penultimate Weapon.

A sub-trope of both Plot Coupon and Plot Coupon That Does Something. Contrast It Was a Gift. See also Supernatural Aid. Sister Trope to Second Hour Superpower and Villain-Beating Artifact.