Literature / Crypt of the Sorcerer 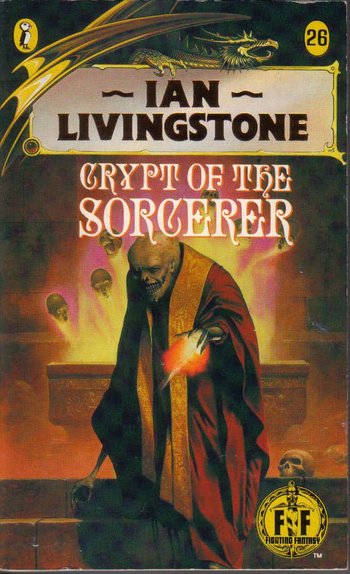 You're going to hate this guy.
Advertisement:

Crypt of the Sorcerer is the 26th entry of the Fighting Fantasy gamebook series, written by Ian Livingstone.

Everything seems to be going well in Allansia, when your home village of Chalice hears of dreadful news from the far east: tales of invasions, plagues, blight and terror are creeping westward. Worried, you decide to consult your old friend, Yaztromo the Wizard, who tells you that the dreaded Chaos Sorcerer Razaak was fred from his tomb, and now he's free to unleash hell on Allansia just like he tried to do when he was alive. There's only one way to oppose him, and that would be finding the legendary Sword of Razaak, which was used once to kill him and then was lost somewhere in the east. Of course, it's up to you to start an extremely dangerous quest: you must travel east, unearth the Sword, find a way to pierce through Razaak's magical defenses and then destroy the evil Sorcerer once and for all, saving Allansia from his grasps.

On paper, it sounds like your standard Fighting Fantasy gamebook, right? Well, not quite. This book is infamous for being probably the most frustating ever written by Livingstone: the linearity of the path which is Livingstone's Signature Style is taken Up to Eleven, forcing you to walk a very narrow path to victory, collect a specific series of clues and items without knowing what they're going to do which will allow you to survive the series of gruesome deaths waiting for you behind each corner. Last but not least, the Final Boss is probably the hardest one ever put in a gamebook, and not in a good way.

In short, it's Livingstone's take on Tomb of Horrors.

Crypt of the Sorcerer provides examples of: