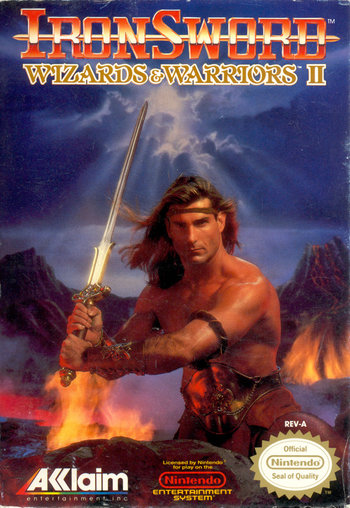 Fabio Not Appearing in This Game
Advertisement:

Released in 1987 by Acclaim, developed by British company Rare, Wizards & Warriors features Knight in Shining Armor Kuros hopping through the kingdom, in search of his beloved (and nameless) Princess, abducted by token Evil Sorcerer Malkil. Along the way, he'll rescue any OTHER Damsels in Distress he happens to stumble over, along with picking up a variety of magical odds and ends.

Wizards & Warriors is a platformer with both dungeon-crawler and mild RPG elements. Players have to roam through large levels looking for enough gems to pay their way to a boss fight and could collect keys, treasure, and special items along the way, while dealing with a limited inventory.

Kuros and Malkil were also regular characters on the cartoon segment of Video Power, with the latter also appearing in the Captain N: The Game Master episode "Nightmare on Mother Brain's Street". The first game was adapted into a book for the Worlds of Power series as well.

Not to be confused with an unrelated RPG with the same name designed by David W. Bradley of Wizardry fame, which was released in 2000. Or with the Wizards & Warriors TV series.