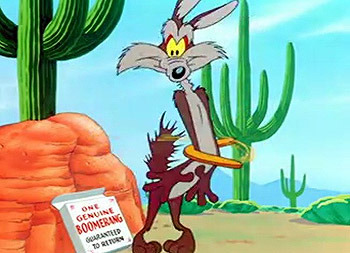 Two for the price of one!
"It's all coming back to you."
— Cartoon Network's sister network, Boomerang
Advertisement:

The Hero is on the ropes, getting his butt kicked by the villain. In desperation, the hero pulls out a weapon and hurls it.

He misses! Or maybe the villain dodges. Either way, the bad guy smirks or laughs at this futile final act of defiance as he closes for the kill...

... only to have the thrown weapon come back and hit him from behind, knocking him out or even killing him. Turns out, the weapon was in fact a Precision-Guided Boomerang (sometimes obviously so), or had boomerang-like properties.

A comedic variant is for the character hit to be also the one throwing the weapon away, believing to get rid of it. Of course, it is extremely unlikely for a boomerang thrown by someone not knowing what it is to actually come back, but this takes a backseat to the Rule of Funny.

See also Exactly What I Aimed At.

And indeed, for some reason involving vibrations, the flying banjo head turns around and snatches Nina's nunchucks to deliver them to Dodgers.