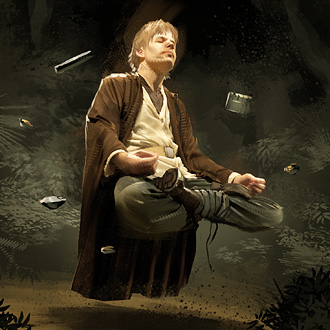 Ommmmmmmmmmmmm...
"I finally came upon the sage floating cross-legged in the air with no visible means of support, for he had no need of a job."
— TuMok, Plan 7 of 9 from Outer Space
Advertisement:

When seated in the Lotus Position, a character may levitate to demonstrate that he or she is meditating particularly profoundly. The Levitating Lotus Position is also used to show that a character is displaying his or her Psychic Powers/Enlightenment Superpowers, intensely concentrating, healing, or is just especially calm.

Levitating while in the Lotus Position may also be a sign that a character is powerful or that he or she is far from normal. However, especially when Played for Laughs, if someone wakes them from their serene inner calm, they'll often spontaneously lose their floaty power and collapse in an undignified mess on the floor.

For bonus points, they may chant "om", a real life Hindu and Buddhist mantra. It's usual too to keep the hands in a mystic gesture, called mudra (usually the chin mudra, with the index fingers touching the thumbs, or alternatively shunya mudra, with the middle fingers instead).

Note that despite its name, the exact posture is not always quite a Lotus Position, as there are several other meditation postures in Yoga that look superficially similar, and many authors aren't familiar enough with them to tell the difference (it also happens that achieving true lotus position or padmasana actually requires a lot of flexibility and training in real life, so an easier pose comes in handy for live-action media). The most popular variation has the character seated on a simpler cross-legged position called sukhasana.

Milla Vodello, the Mental Minx, is an expert at Levitation.

Milla Vodello, the Mental Minx, is an expert at Levitation.