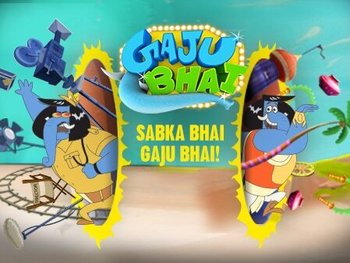 Gaju Bhai is an Indian animated series produced by Toonz Animation and aired on Disney Channel. It premiered in 2016 and has two seasons.

The anthropomorphic elephant man Gaju Bhai enjoys fame as a film actor from Jollywood. When he's not busy working on movies, he goes from a "reel-life" hero to a real-life hero when he is sent to another world called Gajrajpuri by the boy prince Iravan and the constantly-meditating Mahaguru to fight off all sorts of monsters and baddies.

The series was made available on Disney+ Hotstar in 2020.