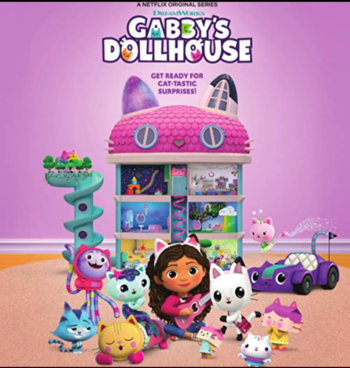 Gabby's Dollhouse is a DreamWorks Animation live action/animated preschool show that came out on January 5, 2021 on Netflix. It's created by Traci Paige Johnson (Blue's Clues) and Jennifer Twomey (Team Umizoomi).

Gabby is an 11-year old lover of anything related to cats. From her pet cat Floyd, to her fully-cat decked out room, almost everything she owns is related to cats, including an important toy: her dollhouse. Filled with various rooms, along with miniature toys of various cats, not only is it her favorite toy, she has a special connection to it.