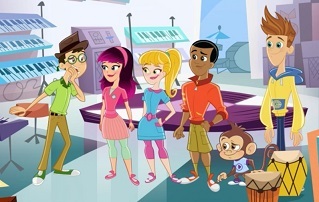 Left to right: Reed, Kiki, Marina, Shout, Bo Monkey, and Twist. Not pictured: Commissioner Goldstar.
Fresh Beat Band of Spies is a children's TV series that premiered on Nickelodeon in June 2015. It is an Animated Adaptation of 2009's The Fresh Beat Band. It follows the adventures of the band members, who are now working as undercover spies when they aren't making music. Each member has a special talent that helps them solve mysteries, as they outwit and defeat the bad guys who perpetrate the crimes. They are joined by their sidekick, Bo Monkey.