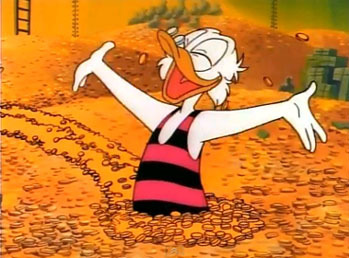 Gold. Gold beyond measure. Beyond sorrow and grief.
"This is gold, Mr. Bond. All my life I've been in love with its color... its brilliance, its divine heaviness."
— Auric Goldfinger, Goldfinger

Fiction is full of characters who love money. But some characters take it a step further. Rather than being in love with the idea of wealth, they are in love with one particular form of wealth: usually either a precious metal, or gems of a particular type.

These characters will do anything to increase their store of their particular commodity, and are usually willing to commit criminal acts to get it. If being paid, they will demand payment in that substance. And their ultimate dream would be to control the world's supply.

If a villain (and they usually are), they are extremely likely to suffer a Karmic Death in the form of a Death by Materialism caused by the commodity they love so much.

Compare Gold Fever which is a (usually) temporary obsession with gold which can overwhelm someone.