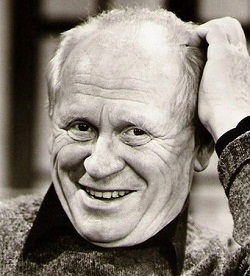 "I am a big man, and I have a laugh to match my size."
Advertisement:

Born in Oberplanitz, Zwickau Landkreis, he initially trained as a violinist, but he abandoned it for cabaret and theatre work. He joined the Nazi Party in 1929 at the age of 16 hoping that "Hitler could bring a solution". This didn't quite happen the way he'd hoped. That was not particularly uncommon in the Germany of the day, but Fröbe left the party in 1937, actually. Once the theaters were closed down in September of 1944, Fröbe was drafted into the German army and served until the end of the war. During that time, he met two German Jews and helped them avoid The Gestapo.

Fröbe gained fame in one of the first German movies made after World War II, called Berliner Ballade (The Ballad of Berlin, 1948). His role as Otto Normalverbraucher (literally "Otto Average Consumer") became a German term equivalent to "Average Joe" or "Fred Bloggs". He was still slender at the time, the he gained weight in The '50s (which gave him his trademark portly looks) and in 1958, he was cast as the villain in the Swiss-German film Es geschah am hellichten Tag (It Happened in Broad Daylight), which was turned into a novel, The Pledge, by Swiss author Friedrich Dürrenmatt.

This latter role as a serial killer of children drew the attention of the producers of the James Bond franchise and he was chosen to play what would become one of the franchise's most iconic villains, gold-obsessed tycoon and Diabolical Mastermind Auric Goldfinger. Because of his former membership in the Nazi Party, the film was initially banned in Israel until the Jewish family that he saved came forward and thanked him for saving their lives, restoring his reputation in the process. He also appeared as Inspector Kras in Fritz Lang's final film, Die 1000 Augen des Dr. Mabuse, and two subsequent Dr. Mabuse films.

Fröbe appeare in a number of movies packing All Star Casts in the 1960s, including The Longest Day, Is Paris Burning?, Those Magnificent Men in Their Flying Machines (he was typecast as a German officer, being a war veteran helped) and Monte Carlo or Bust. Because of his thick German accent, Fröbe was dubbed in some of his classic roles, including by American sitcom star Roger C. Carmel in Chitty Chitty Bang Bang and British actor Michael Collins in Goldfinger (he was however allowed to speak English in his own voice in the 1971 film $).