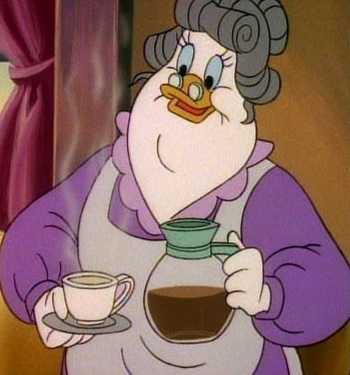 You know this lady. She's portly or Hollywood Pudgy, perpetually smiling and always ready to do what you need her to do—she's always there should you need someone to take out the trash, do the laundry, or just simply be a shoulder to cry on. She'll always have a nice breakfast for you ready in the morning, and will take your coat for you once you come back home. She's the Kindly Housekeeper.

Such ladies can be not just a nanny but also a Parental Substitute to the children in the household (if there are any) to substitute for the Disappeared Dad (if the housekeeper happens to be a man) or the Missing Mom—usually the latter since housekeepers are traditionally women and it's usually The Jeeves who would act as a fatherly figure to the potential children. She will also often play Team Mom to the other servants (assuming she's not the only servant employed). Can be a Supreme Chef considering that it's all part of the job, or an Apron Matron. In the latter case she may also be a Servile Snarker to verbally whip others.

Probably not an Old Retainer, since she usually doesn't have a high regard for doing things the Proper Way. If she's younger and employed by a single father, she might also be a love interest for him.