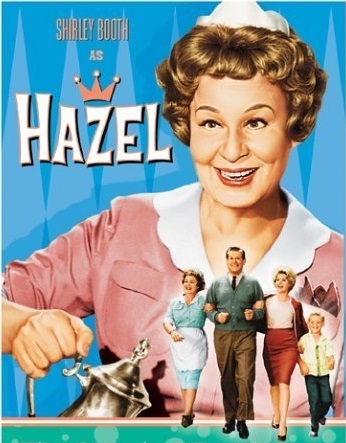 Hazel was an American Dom Com which aired for four seasons (1961–65) on NBC and a fifth season (1965–66) on CBS. It was based on the single-panel comic strip of the same name created by Ted Key, which was published in The Saturday Evening Post and later as a syndicated newspaper comic.

It centered around a live-in maid named Hazel Burke (Shirley Booth) and the suburban family for whom she worked: lawyer George Baxter (Don DeFore), his interior-decorator wife Dorothy (Whitney Blake), and their son Harold (Bobby Buntrock). At the end of the fourth season NBC canceled Hazel, but it made a Channel Hop to CBS, which retooled the premise by replacing George and Dorothy with George's brother Steve (Ray Fulmer), his wife Barbara (Lynn Borden), and their daughter Susie (Julia Benjamin). Harold was kept as well as Hazel of course.