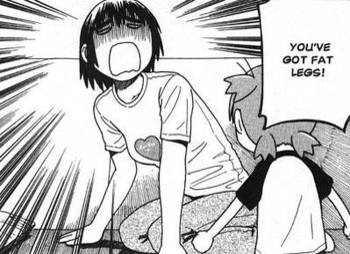 "And by fat, I mean 'thicker than a noodle.'"
"Some girls try it, and go on a diet
Then they worry cause they's too fat
Who wants to ride on an ironing board?
That ain't no fun
I tried me one."
— Frank Zappa, "S.E.X."
Advertisement:

Many people in real life have body image issues that lead them to obsess about food and dieting, and to think of themselves as fat even if they're not.

Like Hollywood Homely characters, if you took the Hollywood Pudgy character out of her movie and plunked her down among a representative sample of real women, she'd fit in because she looks normal, even good in comparison. As an average-sized person, the Hollywood Pudgy character is or appears to be overweight by medical standards but not nearly obese. She'd have no trouble fitting through bus turnstiles or into a cute bathing suit, and wouldn't have her doctor telling her she must lose twenty pounds for the sake of her heart and pancreas.

This does not apply to stories in which a skinny woman thinks of herself as fat, but is shown to have an eating disorder or body image problem. That would probably fall under I Am Not Pretty instead. Satirical examples hang a lantern on the absurdity of calling thin women fat.

The same thing applies somewhat to men as well, albeit to a lesser degree. For example, any time a male celeb known for being Mr. Fanservice goes from a sculpted physique to a more average body type, the media will rant about his "dadbod" and how he "let himself go," and may speculate on his mental health, even if he's nowhere near overweight and might even be happier not having to maintain an impossible image. However, you're less likely to see this trope applied to men onscreen, since Hollywood is far more likely to cast an appropriate actor to play an overweight male character thanks to age-old Double Standards.

Note: Under the examples, PLEASE only include those who are explicitly identified as overweight despite not actually being overweight! This is NOT the page for actors of normal body type playing characters of normal body type, nor for genuinely fat actors playing genuinely fat characters. Anything that is drawn or animated is also extremely unlikely to qualify (Garfield, for example, doesn't even look like a cat), unless the depiction is intended to be realistic or the trope itself is being parodied. If the only time the character's said or implied to be fat is when another character is tossing out insults, it probably belongs under You Are Fat instead of this trope.

Also in real life when singers and band members prepare to go on tour, it is very common for them to overindulge and voluntarily take on weight. If the show is of any quality (especially for pop, rock and metal type bands and singers), they will likely lose it right back before they get back home. Of course this is paparazzi fuel.