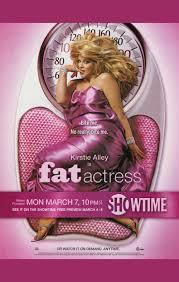 Fat Actress was a series that ran for just seven episodes on Showtime in 2005. It starred Kirstie Alley as a past-her-prime actress trying to rejuvenate her career. Many of the jokes revolved around the fictional Kirstie's struggles with her weight and celebrity culture.

Tropes appearing in the series include: