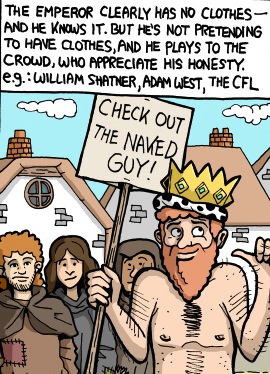 "That one part I played has given me a license to be absurd. I can say pretty well anything, because people know it's not Tom Baker talking."
— Tom Baker on his role in Doctor Who
Advertisement:

Or they can resign themselves to their fate, and make a career out of it by "Adam Westing".

While this can be an Affectionate Parody, it can also be a way for the actor to vent their spleen against a part that got old fast and/or ruined their career, until it amounts to blatant Self-Deprecation. Particularly bitter actors will make the parody a Deconstruction of their old part, explaining how it was a horrible role and nobody should watch it. Like all Deconstruction, this can come full circle, with the actor doing a Reconstruction Self-Parody. Sure, the role was stupid, but they enjoyed it.

Compare closely to the use of Meta Casting, where this can be turned around and made impressionable by playing off this personality. Adam Westing is most often found among actors who have had certain forms of Typecasting:

See also The Danza, where the character's name is clearly taken from the actor portraying them. See also Parody Assistance, when the actor works on a parody of whatever show/film/etc. made them famous. Very closely related to Playing with Character Type, which is when a typecast actor takes on a role superficially similar to their "type" in order to subvert, deconstruct or otherwise play with it.

Adam West
Adam West, the Trope Namer, couldn't get serious work after Batman. He embraced it; almost every subsequent role of his was a parody of either Batman the goofy superhero, Adam West the washed-up actor, or both at once.
William Shatner
Almost every other role William Shatner has had since Star Trek is him playing William Shatner the egotist. He specifically avoids the I Am Not Spock effect, by virtue of creating a "SHATNER" persona,

of which Kirk is but one mere part. One must wonder, however, if it has reached the level of enlightened self-parody or if he has become genuinely unhinged (MAD once put it that he is trying, thirty years too late, to prove to everyone that he was always "in on the joke") — see his appearance on Friday Night with Jonathon Ross.
George Takei
William Shatner's co-star George Takei, a.k.a. Sulu, generally Adam Wests in live action, but can get quite subtle and effective in voice acting. A recurring theme, if they don't get into his sexuality, tends to be drinking.
Other Star Trek examples
Stephen Hawking
The quintessential Real Life Genius Cripple thoroughly enjoyed cameos as himself. One comes to suspect that the reason he refused to upgrade his vocalizer (other than getting one with a British accent) is because it let him snark in a Machine Monotone.
David Hasselhoff
David Hasselhoff. "The Hoff" is on his way to reaching Shatnerian levels of Adam Westing.
Jeff Goldblum
Jeff Goldblum's best-known roles are Gibbering Geniuses, he's most associated with "genre" fare, and offscreen he's regarded as

a cross between a Cloud Cuckoolander and The Charmer. With his famous, affected Verbal Tic of fumfering

easy to parody, he's been spoofed and mocked since the mid-1990s heyday of Jurassic Park and Independence Day. He finds this Actually Pretty Funny, and come the Turn of the Millennium began spoofing himself in earnest. His returning the affections of both his fanbase, which made him the subject of many a Memetic Mutation, and fellow creatives by leaning further into eccentricity made him more popular than ever in The New '10s.
George Lazenby
George Lazenby will gladly spoof his most famous role.