Series / The Real Husbands of Hollywood 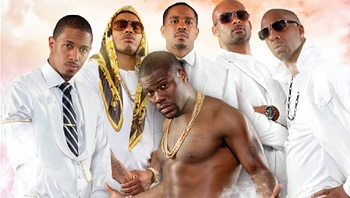 Real Husbands of Hollywood is a BET comedy created by Kevin Hart and Chris Spencer.

A parody of similarly named reality shows, Kevin Hart and other celebrities play comic, fictionalized versions of themselves, with episodes often featuring Kevin's attempts to gain celebrity status and his jealousy of his friends.

The Real Tropes of Hollywood: