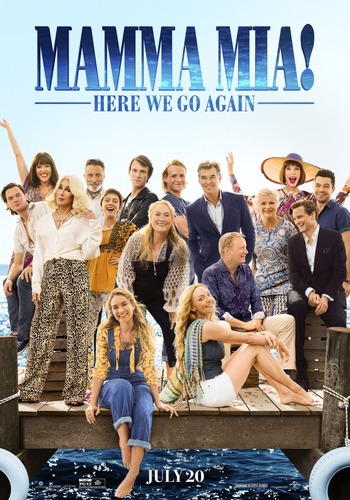 ♫ My my, how can I resist you?
Mamma mia, does it show again
My my, just how much I've missed you? ♫
"[T]he best things in life, the very best things, happen unexpectedly."
— Donna
Advertisement:

A sequel to the 2008 Jukebox Musical film Mamma Mia! (which in turn, was based on the ABBA stage musical of the same name), Mamma Mia! Here We Go Again was written and directed by Ol Parker with the help of Richard Curtis (Love, Actually) and Catherine Johnson (who created the Mamma Mia! stage musical).

It's been five years after the events of the first film and Sophie (Amanda Seyfried) is preparing a grand reopening of her mother Donna's hotel, with the help of her mother's friends Tanya and Rosie (Christine Baranski and Julie Walters), the staff, as well as hotel manager Mr. Cienfuegos (Andy García), but she is worried that Sky (Dominic Cooper) will not make it in time, and everything seems to be going wrong. A year before, her mother died and the hotel was being redecorated in her honour with a large guest list, reminding Rosie and Tanya about the struggles Donna had when she first got to the island. What follows is a series of flashbacks throughout following younger Donna (Lily James) after she graduated with her friends, when she travelled around Europe, and when she met Sophie's three fathers: Sam (Jeremy Irvine), Bill (Josh Dylan) and Harry (Hugh Skinner).

Virtually every member of the original cast reprises their role from the first; alongside the ones mentioned above, Pierce Brosnan, Colin Firth and Stellan Skarsgård reprise their roles as Sam, Harry and Bill respectively, while Cher appears as Sophie's estranged grandmother, Ruby.

Despite considerably better reviews than its predecessor, Here We Go Again, while still successful, grossed about $200 million less at the worldwide box office.

♫ Yes, I've been brokenhearted
Blue since the day we parted
Why, why did I ever let you go? ♫