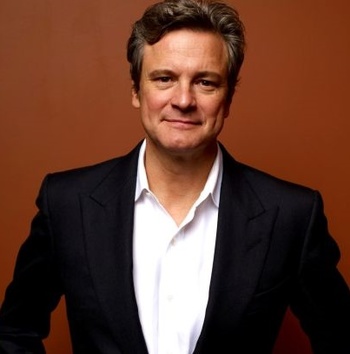 Colin Andrew Firth CBE (born 10 September 1960 in Grayshott, England) is a British actor known for his ability in both comedy and drama (and for being very handsome).

After a youthful career of small roles, fame finally arrived following his performance as Mr. Darcy in the acclaimed 1995 BBC miniseries based on Jane Austen's Pride and Prejudice, which made women swoon all over the world. Some notable supporting roles in films were to follow, including The English Patient and Shakespeare in Love, both of which featured the rare event of his character losing in a love triangle (to one of the Fiennes brothers, in each case; perhaps they're his kryptonite). Real film stardom came with 2001's Bridget Jones's Diary, where he basically reprised his role as Mr. Darcy for the 21st century. In the following decade, Firth became a fixture of both romantic comedies and some smaller, more serious films. By the end of the decade, he had decisively established himself as a serious actor, with an Academy Award nomination for A Single Man and widespread acclaim for his work as King George VI in The King's Speech which earned him the Academy Award for Best Actor, as well as just about every other major acting award.

He has been married to Italian producer/director Livia Giuggioli since 1997. No relation to Peter Firth.

The notable works of Colin Firth include:

So hail Satan, and have a lovely afternoon, madam.