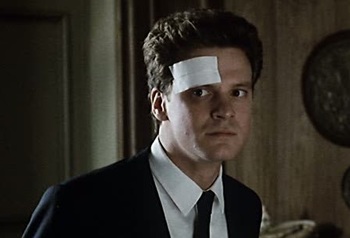 Don't worry. He'll clean the carpet.
"He could be anyone. Perhaps someone you know. Someone in your family. Someone you work with. Someone you trust. Even your next door neighbor."
— Newscaster
Advertisement:

Apartment Zero is a 1988 Argentine-British thriller written by Martin Donovan.

Adrian's mother is sick, and her health starts to get worse. One of Adrian's employees uses the theater to show footage that will help people identify war criminals for the authorities. Jack gets along well with the new neighbors.

Everything seems fine, at first. But Adrian is clingy and possessive, the neighbors are suspicious, and a killer is stalking the streets of Buenos Aries.