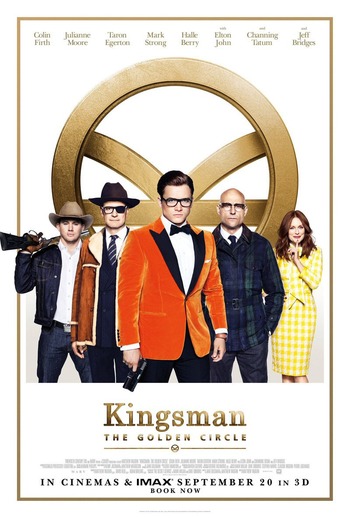 A proper spy movie.
"My name is Poppy Adams, CEO of the Golden Circle. We engage in an aggressive business strategy, invest in the latest technology, and take strict disciplinary action. I'm speaking to you today because our world leaders have let us all down, so we are coming out of the shadows and taking over. And to make sure no one gets in our way... Kingsman is crumpets!"
— Poppy Adams
Advertisement:

Kingsman: The Golden Circle is a 2017 spy action film, directed by Matthew Vaughn and written by Vaughn & Jane Goldman. It is the second film in the Kingsman series, and a sequel to 2015's Kingsman: The Secret Service.

When the Kingsman HQ is destroyed and most Kingsman agents are killed by Poppy Adams (Julianne Moore), a Martha Stewart-esque entrepreneur and leader of the villainous Golden Circle organisation, agents Eggsy / "Galahad" (Taron Egerton) and Merlin (Mark Strong) travel abroad and team up with their American counterpart, Statesman. With help from Statesman leader Champagne (Jeff Bridges), tech support Ginger Ale (Halle Berry), and agents Tequila (Channing Tatum) and Whiskey (Pedro Pascal), Eggsy and Merlin must take down the Golden Circle before Poppy and her minions can upend the world order.

The film is followed by a prequel set during World War I, The King's Man, which details the foundation of Kingsman. A script for a third Eggsy/Harry Kingsman film is ready

Standing on an active landmine, Merlin chooses to sacrifice himself to clear the way to Poppyland, and decides to sing his favorite song in his last moments: Country Roads

Standing on an active landmine, Merlin chooses to sacrifice himself to clear the way to Poppyland, and decides to sing his favorite song in his last moments: Country Roads