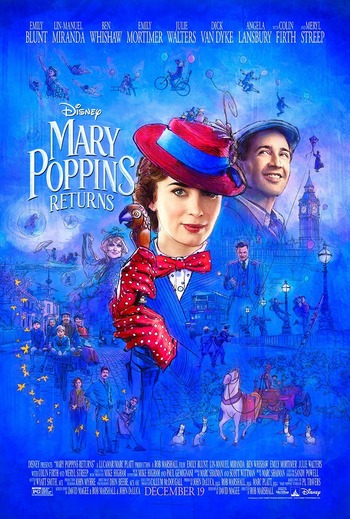 A new story begins.
"Everything is possible. Even the impossible."
—Mary Poppins
Advertisement:

Mary Poppins Returns is a 2018 musical fantasy film, the sequel to the 1964 Walt Disney Pictures classic Mary Poppins. Directed by Rob Marshall (Chicago, Into the Woods), it is set over two decades after the first film and inspired by the sequels P.L. Travers wrote after her original Mary Poppins book.

It's been 25 years since Mary Poppins was nanny to the Banks children. Jane and Michael are adults; Michael has children of his own — Annabel, Georgie, and John, and still living in the family home at Number 17 Cherry Tree Lane. Unfortunately tragedy strikes the family in the midst of The Great Depression when Michael's wife dies. So Mary Poppins comes back to restore joy to their lives.

Jack: I won't forget, Mary Poppins. Promise.
So hold on tight to those you love
And maybe soon from up above
You'll be blessed so keep on looking high
While you're underneath the lovely London sky.