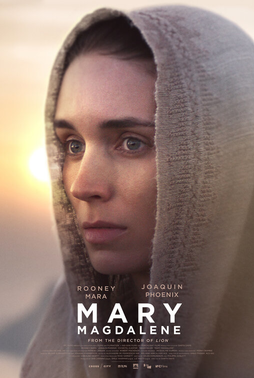 Her story will be told.
And she asked him, "What will it be like, the kingdom?"
And he said, "It is like a seed. A single grain of mustard seed which a woman took and sewed in her garden. And it grew, and it grew. And the birds of the air made nests in its branches."
— The opening voiceover
Advertisement:

Mary Magdalene is a 2018 film by Helen Edmundson and Philippa Goslett, directed by Garth Davis. It stars Rooney Mara as Mary Magdalene

, the disciple of Jesus Christ (Joaquin Phoenix) who was the first to witness his resurrection.

The film sets about to correct popular misconceptions about Mary—particularly the idea originated by Pope Gregory that she was a prostitute. It depicts her as a strong-willed young woman from a small coastal village who encounters Jesus on his travels and becomes his first and most devoted follower and counselor. She is portrayed as deeply spiritual in her own right, with a powerful intuition.