Truer to the Text 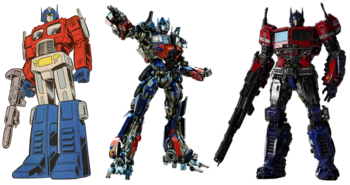 If a book or comic becomes sufficiently popular, it will almost definitely get a TV show or a movie. While some fans rejoice upon hearing that their favorite series is getting an adaptation, all too often a contingent of the fanbase will find themselves miffed about changes to the work that the general public might not care too much about, and consider that a part of what made the original great is missing. The problems are especially likely to surface when the story is ongoing and the staff has to work with incomplete source material. The usual result of such circumstances is a Broken Base.

It's important to keep in mind that changes from the source materials have often been a good thing, and sometimes very necessary. Sometimes being more faithful is a technicality rather than anything significant and, if done badly, will displease those who wonder why the new adaptation was made in the first place if it wasn't going to do anything new.

The cycle of adaptations from earlier work usually follows a certain model:

Sometimes the IP is so valuable that there are many adaptations and inevitably one or more of them, to distinguish itself from the crop, and better market itself, will try and be more faithful to the original adaptation. This adaptation will go out of its way to cover what they missed out on last time and fill itself with more Continuity Porn. There will be no annoying additions, no alternate endings, no important details ignored, just the original story, pure and proper. If done well, the fandom will probably be quite pleased. Or, alternatively, it's closer to the original story far more than other adaptations have been. Some IP are truer to the text in relative comparisons to other adaptations of the same material, but even then it will likely choose what to emphasize and highlight, and other takes might well do their own versions.

If a previous less faithful adaptation has been especially impactful, a Truer to the Text later adaptation may have negative reviews due to it lacking elements that actually weren't in the original work.

When using this trope keep in mind that it refers to works that have been adapted multiple times, has to specify what part of the text it is truer to compared to other versions. To qualify, a work need only be truer to the text relative to other adaptations (subjective quality is irrelevant).

This is a list of examples that have already been done or are in the works. Do NOT list a series unless it has been officially announced. Mere rumors are not enough.