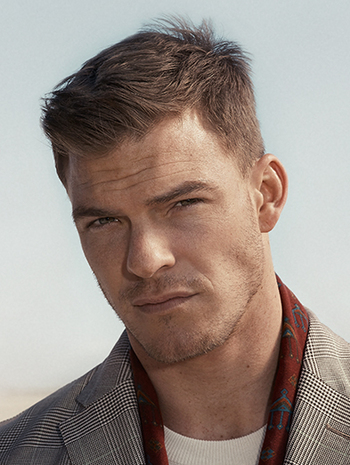 Ritchson is best known for his portrayal of DC Comics characters in both live-action and animation. He was the first actor to portray Arthur Curry / Aquaman in live action, in the WB's Smallville, and later reprised the role in Justice League: The New Frontier, the animated 2008 adaptation of DC: The New Frontier. He later took the role of Hank Hall / Hawk in DC Universe's Titans.

Outside of DC projects, Ritchson is known for his role of Thad Castle on Spike TV's Blue Mountain State, as well as its follow-up movie Blue Mountain State: The Rise of Thadland. Ritchson also portrayed Raphael in the 2010s Teenage Mutant Ninja Turtles reboot films, providing motion capture and his voice.

He headlines the series, Reacher that airs on Amazon Prime Video starting 4 February 2022. Ritchson has also moved into behind the camera work, with his directorial debut Dark Web: Cicada 3301 heading to digital platforms in 2021.

Little-known fact about Ritchson: his first credit in television or film was actually American Idol in 2004, wherein he auditioned as a contestant and made it as far as the Hollywood round. Paula Abdul especially took a liking to him.

Television Without Pity pointed out at the time that his name is an anagram for "Trashcan Loin".