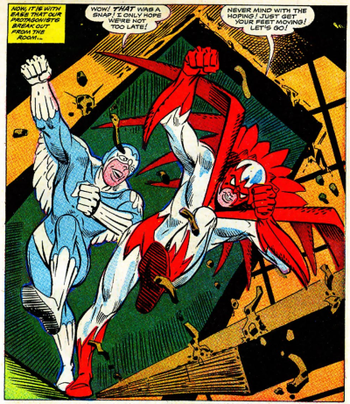 Hawk and Dove are a duo of superheroes created by Steve Ditko and Steve Keates.

Hank and Don Hall are two brothers with opposing points of view; while Hank believes in violence as the only way to solve any problem, Don believes in reaching his enemies with an open hand instead of a closed fist. Two Lords of Order and Chaos (cosmic entities of The DCU), to show their peers that order and chaos can work together, bestow the brothers with heightened strength and agility each time that Hank yells "Hawk!" and Don says "Dove!" Hawk and Dove eventually meet and join the Teen Titans.

After Don's death during Crisis on Infinite Earths, a woman named Dawn Granger became the new Dove to keep Hawk balanced. This lasted for a while, between 1986 and 1991, until Armageddon 2001, when due to behind-the-scenes reasons, Hank became the supervillain the Monarch, and Dawn died. Hank disappeared for some time, before re-appearing in Zero Hour: Crisis in Time! as Extant, the supposed Big Bad (though he was actually working for Parallax, the real villain of that story).

(At around this point, another Hawk & Dove were introduced in the wake of another Crisis Crossover, who had absolutely no connection with the Lords of Chaos and Order or Hank and Dawn. They got their own miniseries, joined a Titans offshoot that didn't go anywhere, and were never mentioned again.)

During Geoff Johns run on Justice Society of America, Extant was killed by Atom Smasher. And then Dawn turned out to have been alive all along, her death having been faked by the evil wizard Mordru, who was also responsible for Hank's descent into villainy. The next time Dawn reappeared, she had a new partner, her never-before mentioned sister Holly, who'd been living in Britain. The duo remained mostly in the background for a time.

Then, in Blackest Night, Hank was brought back as a Black Lantern, who hunted down and killed Holly. At the end of the event, Hank was revived by the White Lantern. He and Dawn then joined the newest version of the Birds of Prey. At the same time, Dawn began a relationship with Deadman.

When DC instituted the New 52 line-wide reboot, Hawk and Dove (the Hank and Dawn version) got a new series, which introduced several new bird-themed avatars, opposed to Hawk and Dove. However, it didn't sell well, and failed within eight issues. They have appeared in Titans Hunt (2015), which reveals that a version of the classic Titans once existed in the New 52 universe, but everyone involved had their memories wiped. Apparently including Hank's memories of Don, who sacrificed himself to save the team.

Hank and Don Hall appear sporadically in Justice League Unlimited, including one episode named after them where they are the focus characters with Wonder Woman. The Hank and Dawn incarnation of Hawk and Dove appears in the live-action series Titans, portrayed by Alan Ritchson and Minka Kelly, respectively, with Elliot Knight portraying Don in flashbacks. Holly is confirmed to also exist, though she doesn't make an appearance (at least not yet).