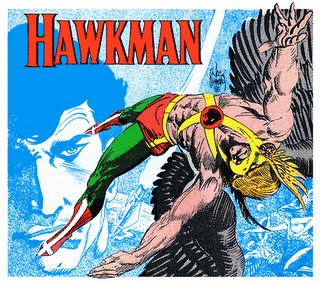 "With a weapon of the past, I shall defeat an evil of the present."
Advertisement:

The Animal-Themed Superhero.note Batman appeared first but is a Badass Normal, and Spider-Man is far more famous but came more than 20 years later, so...

Hawkman is one of the oldest of DC Comics' superheroes, having been created in 1940, during The Golden Age of Comic Books. He's also one of the most infamous cases of Continuity Snarl in the world of comics.

As originally envisioned, Hawkman was really archeologist Carter Hall, who discovered that he was actually the reincarnation of an Egyptian prince named Khufu, and that he had been murdered long ago by an evil priest along with the woman he loved. Furthermore, both the priest and his lover had also been reincarnated, and the former had now captured the latter! Arming himself with equipment found at a museum, as well as using an anti-gravity metal called "Ninth metal" (later renamed Nth metal) to fly, Carter created the costumed identity of Hawkman to go rescue her. Shiera Saunders would later join him in his adventures as "Hawkgirl". Hawkman would also become one of the founders of the first superhero group, the Justice Society of America. Hawkman was the only hero to appear in every single Golden Age JSA story. When Alan Scott/Green Lantern left the group, Hawkman was elected chairman and remained so for the rest of the JSA's run in All-Star Comics.

Hawkman's feature in Flash Comics ended when that book was canceled in 1949. He continued to appear in All-Star Comics until that book was cancelled in 1951, bringing DC's Golden Age of superhero comics to an end. During The Silver Age of Comic Books, he was reinvented, this time as Katar Hol, a law enforcement agent from the planet Thanagar (conveniently inhabited by Human Aliens) who came to Earth (along with his partner and wife Shayera) to study Earth's crimefighting techniques, and they assumed the identities of museum curators Carter and Shiera Hall. They also acted as superheroes (using their Thanagarian uniforms) and became known as Hawkman and Hawkgirl (later renamed Hawkwoman). They soon joined the Justice League, the modern version of the Justice Society, and even met the original Hawks during the League's team-ups with the Society (which was established as having existed in the parallel universe called Earth-2.)

(At around this time, Hawkman appeared on Challenge of the Super Friends. Since no one on that show was allowed to throw a punch, his prowess was portrayed as ... somewhat less than stellar. Basically, he could fly, and that's it — which for a super hero is like being able to tie your shoes.)

Up to this point, there was no real confusion over the Hawkman characters. It all started after DC decided to Retcon their universe with the Crisis Crossover called Crisis on Infinite Earths. All of DC's titles were supposed to undergo a reboot afterwards; but due to poor editorial overseeing, some titles were rebooted but others were not. More specifically, the original Silver Hawkman was initially still around after the Crisis, even having his own ongoing series again. However, in 1989, Tim Truman and John Ostrander wrote a miniseries called 'Hawkworld'; the idea was not to remove or retcon the Silver Age Hawks as they were now, but rather to give their origin a more modern update. However, for whatever reason, it was decided that Hawkworld would turn out to have taken place in the present day, thus completely rebooting the Hawks, despite such a change occurring 4-5 years after Crisis. In the end, Silver Age Hawkman was reinvented as a Darker and Edgier character who had only recently arrived on Earth—but due to this change happening several years after the Crisis instead of right after it, Hawkman was still supposed to have been a member of the League for years! They explained this by claiming that the winged heroes in the League were actually the Golden Age Hawkman and Hawkgirl (since all DC characters now existed in one universe) and, later, that a Thanagarian spy had joined the team as Hawkman.

When DC decided to fix its post-Crisis mistakes with another reality-changing crossover (Zero Hour: Crisis in Time!) somebody came up with the idea of having the various Hawks... merged into a single being, known as the "Hawk-god". This idea was poorly received and his series was soon cancelled. DC was so desperate over the mess that they actually forbade anybody from using the character for years. (Which is why Grant Morrison was forced to create/sub in Zauriel when he was writing JLA.)

When the Justice League animated series was made, it was decided that Hawkgirl, rather than Hawkman, would be a member (leading to an entire generation that consider Shayera, rather than Katar, to be "the" Justice League Hawk.) A Hawkman expy, Hro Talak, was introduced in the series as her former lover and a bad guy! Even later, an actual Hawkman character (Carter Hall, following a variation of the Golden Age reincarnation origin) was also introduced in the cartoon.

Back in the comics, DC tried to exploit Hawkgirl's post-cartoon popularity by introducing a version of her in the new JSA book. This was Kendra Saunders, the niece of Shiera who was not a reincarnation but had been posessed by her aunt after attempting suicide. Hawkman was finally brought back later in JSA, with a new origin that explains that both Khufu and his mate have reincarnated many times. Carter's new incarnation was born on Thanagar with some aspect of Katar Hol's soul, the latest attempt at tying the two Hawkmen together. The reborn Carter got his own book, which lasted until Infinite Crisis, at which point he got caught up in the Rann-Thanagar War and his unavailability for Eath-based stories meant Kendra got her own Hawkgirl book continuing the numbering, until it was cancelled sixteen issues later.

In 2011, the entire DC Universe was rebooted, erasing all the history (good or bad) of most characters including Hawkman. Hawkman had his own self-titled book which established him as Carter Hall... before Rob Liefeld came on as writer and retconned him into being Katar Hol. Hawkgirl (Kendra Saunders again) is featured in James Robinson's Earth-2, but isn't connected to the Hawkman mythos, being neither a reincarnation or alien. Katar would eventually die in the Death of Hawkman miniseries. The DC Rebirth event Dark Nights: Metal reintroduced the reincarnating Hawks, both having operated as Hawkman and Hawkgirl in the past. Carter was introduced as being lost in the Dark Multiverse while Kendra Saunders (this time with memories of her previous lives) disposed of her Hawkgirl equipment and became Lady Blackhawk. In the aftermath of the event, the Hawkman (2018) series began, which starred Carter Hall and later also Shayera Thal, and explored the past lives of the Hawks — and revealed that life for them did not begin as Khufu and Chay-Ara. Kendra became a main character in Justice League (2018), which explored her ties to the Totality.

Hawkman and Hawkwoman appear as members of the Justice League on the Young Justice series. Hawkgirl (Kendra Saunders) is a playable character in Injustice: Gods Among Us. Hawkman was also a recurring character in the late seasons of Smallville, played by Michael Shanks. Hawkgirl (Kendra Saunders version) and Hawkman (Carter Hall) also feature in the first season of the Arrowverse spinoff Legends of Tomorrow, played by Ciara Renée (also Anna Deavere Smith in a past, elderly incarnation) and Falk Hentschel, respectively. Another incarnation of Hawkman is set to appear in the 2022 film Black Adam set in the DC Extended Universe, portrayed there by Aldis Hodge.

This character(s) provides examples of the following: